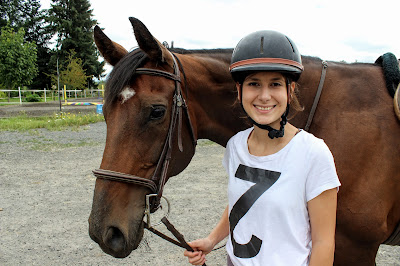 Gender: Female (Mare)
Birthday: Jan. 1, 2004
Life Backstory: I do not know all of Casey's life story. I mostly just know little snippets. I know that she was bred and trained for racing, but after breezing her a few times, her owners decided that racing was not for her. She never actually entered a race. After that I don't know what happened, but at some point, she was trained for jumping. She had an owner who brought her to my barn a few years ago, but after a while the owner decided that she didn't want to pay for a horse and so she gave Casey to my trainer. My trainer had Casey for a few years and was planning on using Casey as her show hunter horse, but just never had the time to commit to Casey. She tried using Casey as a lesson horse and apparently Casey was awful at being a lesson horse. She couldn't handle having a different rider on her all of the time. I first met Casey when I started working at my barn which was in 2014. At this point, nobody was riding Casey and she was just living out in pasture and becoming very fat. The summer of 2016 I asked my trainer if I could work on retraining one of her many project horses and she told me to work with Casey. From the first ride, I knew that Casey was something special because we just clicked in the way that only happens once in a blue moon. A month after I started working with Casey I bought her (for a dollar). She is my first horse and I adore her!

Favorite things to do: Hang out with Ava, eat ALL of the things, gallop around like a crazy horse, and JUMP!

Least favorite things to do: Walk under saddle. Why walk when trotting is so much more fun?! Have dogs running around her. Have anything touch her face.

Favorite food: She has liked everything that I've given her so far. The only things she dislikes are peppermints (but only sometimes, other times they are delicious).
Best friends: Ava
Posted by Zea Kwon-Page at 10:49 AM