Since Casey got her hocks injected on Monday, I had to wait a few days before I could ride her again. She was on paddock rest + Bute for four days and I hopped back on her Friday and rode again today.
So far I'm having trouble telling what impact hock injections are having on her. She's moving a bit strangely (it feels like she's moving more bouncily than normal) and I can tell she isn't totally comfortable. 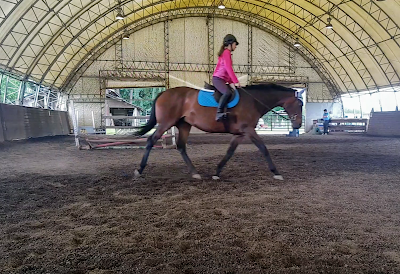 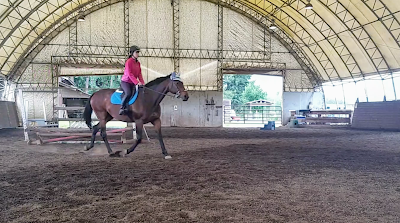 Trainer said that it could take Casey a while to start to get used to the new feeling in her joints, so I'm assuming it's just that. Another boarder also thought that it could be that now Casey's hocks feel good, so it could be making her more sensitive to other things. I'm not really sure which theory is more accurate, but am not stressing about it either. Since the vet dialed down the exercise regime for the two weeks following the hock injections, I'm assuming this is why. 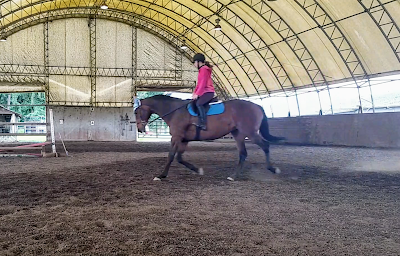 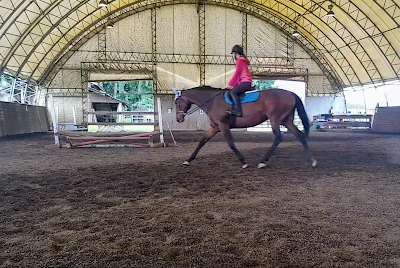 All in all our rides have been pretty boring. It's been raining a ton so we've been stuck in the indoor arena, which is smaller and I have to ride while other people are riding. We've been focusing a lot on leg yielding. I think that Casey gets the idea now, but doesn't commit to it. She's starting to cross her legs, but barely-barely... This is still better than where we were before though, because when I first bought her, Casey thought leg could only mean go fast.
The most interesting part of the past two rides is that Casey spooked! I'm not really sure what she spooked at (another horse causing a ruckus in their paddock?), but we were just walking along and then all of the sudden we were cantering. She stayed pretty level-headed for a spook though and I was able to get her under control within seconds.
Other than moving a bit strangely, Girlie is doing great. No more mauling herself and she's being fairly calm. It's nice when your horse doesn't act like an evil Satan creature :P